Lore Of All Regions

Further back than time could remember, the first beings awoke in the ethereal. There was nothing, but there was also everything they needed. They looked to each other in hopes that the other had answers, but none did. Without a memory of where they came from, they chose to work on what they did know. The beings knew who they were, or at least who they had been. Discussing with one another the little they could remember, they sought out what they had in common. All had been members of the same species of course, but they also knew they had powerful abilities. Perhaps the most powerful. The magic they wielded felt effortless in this place between worlds, coming to them like breathing.

In their own curiosity, they practiced.

The eldest of the group stepped forward first, the magic moving around him in a rush of greens and browns as the earth formed beneath them, grass and trees sprouting into the distance around them. The second bowed onto the fresh soil, whispering into it the waterways and lakes that rose and carved into the landscape, meeting the new ocean that surrounded the land. The next rose up from the earth and looked to the void heavens above, throwing stars into the sky and giving birth to the sun to warm the plane below. A set of twins looked to each other, the gentlest of the two breathed air into the world, the first breezes rustling the fresh leaves of the trees and the first tufts of clouds began to appear. The wisest of the twins hummed with energy, radiating magic out into the world which all other elements before took hungrily. The last among them, who had been all but forgotten, stepped up to their circle of power. His bare skull glowed black as he sowed the seeds of discord into their new kingdoms, creating the places between elements as his domain.

As they came together, all proud of what they had accomplished, they felt a similar lacking- a longing for more. After a few moments of pondering, it was agreed. They filled the world with life in all forms, the first birds filled the air with their songs and were quickly joined by the calls of frogs and cicadas. The first symphony played.

But still, they wanted more.

Then they discovered it: the missing piece.

It was risky, nothing any of them had ever done before. The wisest twin spoke of the risk but also helped find a solution, and all came into agreement. Knowing what was at stake, they began. Jagmeet, the eldest, pulled the form of this missing piece from the earth, carving out even the smallest details as it now stood in the ring they formed. Haukea, the second, leaned her horn to the statue, filling it with flesh and blood inside this stone casting, careful to leave the rigid earth for bones. Anevay, the next, blew flames over the creature, filling it with warmth and passion, a drive to survive at all costs. Frysil, the gentlest twin, blew the first breath into the creature’s lungs, giving them a voice and a longing for happiness. Aberfa, the wisest twin, leaned and kissed the new being, granting them consciousness and the ability to wield the magics of the world as the first bursts sparkled around them. The last, Keir, whispered to this creation the truths of the world as all life knew, and blessed them with morality.

As they stood back, the first of its kind opened its eyes. Blinking them, it looked over its creators with awe, or at least what assumed was awe. It was perfect in every way, and they were very proud of this new being. The missing piece.

This rush of pride would be their undoing.

Overzealous, the creators pushed themselves to fill this new world with their creation, hundreds became thousands almost instantly, and then millions. They dotted the landscape, the foundation of their species all sparkling pure white like fresh snow. It was glorious. It was beautiful. It was everything they wanted. It was too much.

The cost was not something they considered, and the bill had come due.

They collapsed as the last magic floated away into the air, their bodies weak from the great effort they put into making the Quirlicorns as they would become known. As they struggled to stand, gasping with exhaustion but still beaming with pride, they made an agreement to rest until they were strong enough again. They pushed themselves onward in their separate ways, walking as far as their bodies would allow to a safe place to rest.

Where they slumbered, their magic radiated out into the land, altering the climates and landscapes around them. This helped defined the elemental regions as they are now known. Anevay’s heat radiated out and dried the land into sand and stone, where only the hardiest would be able to survive. Keir’s magic oozed and tainted the forest he slept in, softening the soil to muck as water slowed to a near standstill around him, a great swamp rising around him. Frysil and Aberfa’s lands rose up beneath them into towering monuments. Frysil’s highlands were barren of trees but a stiff wind carved the standing stone into fantastical shapes as grass climbed over even the roughest crags. Aberfa’s mountains rose high into the sky, some above the clouds and the furthest as rolling green hills, covered in winding streams and lush forests. Jagmeet found himself a cave to retreat into, slumbering deep below the land. The land above him flattened out into grassy plains, dotted here or there with caverns snaking beneath it. Haukea sank into the sea for her sleep, the land above her blowing into permanent winter, as snow and ice claimed all within its reach.

Their slumber felt brief but would stretch over the next few centuries until they had been all but forgotten to their creations.

A sprout grew from the magic saturated soil, within the ring where all was made. It grew quickly and greatly and was much more conscious than the other plants around them. Of course, the grass sang with the wind, and the trees hummed out their thoughts to each other in the wood, but this tree stood alone. The bark of this willow almost glowed white as the magic within it whispered into the wind, barely audible to the animals around them if they dared to listen.

Its long leaves danced over the ground, and all around it grew lusher than anywhere else. A pond formed under its eastern bows, crystal clear spring water with colorful fish swirling just below the surface. Under the canopy, in the shade of the now great willow, grew a lush garden of flowers. These flowers hummed with the same magic as the willow, though softer and proved to be great company for the lonely tree. The flowers magic were gifts unto the world, as they concentrated into swirling dews of many colors and glittering in the beams of sunlight that found them.

These gifts were only able to be unlocked by beings of magical ability, as their properties did nothing for the occasional wandering grazer or pollinator. But when they were discovered by the beings first made in this place, the Quirlicorns quickly discovered the dews abilities and began sharing their knowledge with all of their kind. Quirls still come from far and wide to taste these dews, visiting the tree for hours or even days to speak with them and enjoy their company. Their knowledge of the land is extensive and has gathered many stories from all who sit with them, so the willow is often considered the chronicler of the world’s history.

Across space watched the oldest being, though time meant nothing to her. She stood on her plane and watched all dimensions around her with great interest and admiration. She called herself Zahavah, though no others knew her so personally. None had held the power to. Within her gaze was all things at all times, for she had made it from the beginning. Her land, if it could be called such, was a meeting place for all of the many things. All dimensions met here, though the portals tend to be finicky on when and why they open.

It was a peculiar day when beings started to appear on her plane, lost and disorientated. She greeted all who came, as she had no company to speak of, normally, and considered that perhaps these beings held great power in order to come to her. The first to ever appear in her land was a peculiar event. Six portals had opened at once and each one brought through a single being. The six were only similar in being, but not in appearance or power.

Stepping onto the visible plane from the ethereal, Zahavah greeted them, though they all seemed confused as to why they were there. With a warm smile, she granted each a magic of her own, welcoming them to the world between all worlds. They were grateful, as always for their new gifts, but had no ideas for their use.

“Create.” Was all Zahavah could offer before another portal, larger than others before, opened for them and hummed with power.

With only a moment of hesitation, they looked to each other before walking through into the unknown, the portal shutting with a crack of electricity as the energy sputtered through the thick magic in the air.

Alone once more, Zahavah faded back into the ethereal to continue her spectating of the dimensions. She watched on as these new gods worked to make a dimension for themselves, though they seemed to have forgotten their encounter with her. It was better this way. She enjoyed her peace, so she made it so all who met her would forget her as soon as she was gone. Though she was never truly lost to their memories, just unreachable outside the Astral Region. sta.sh 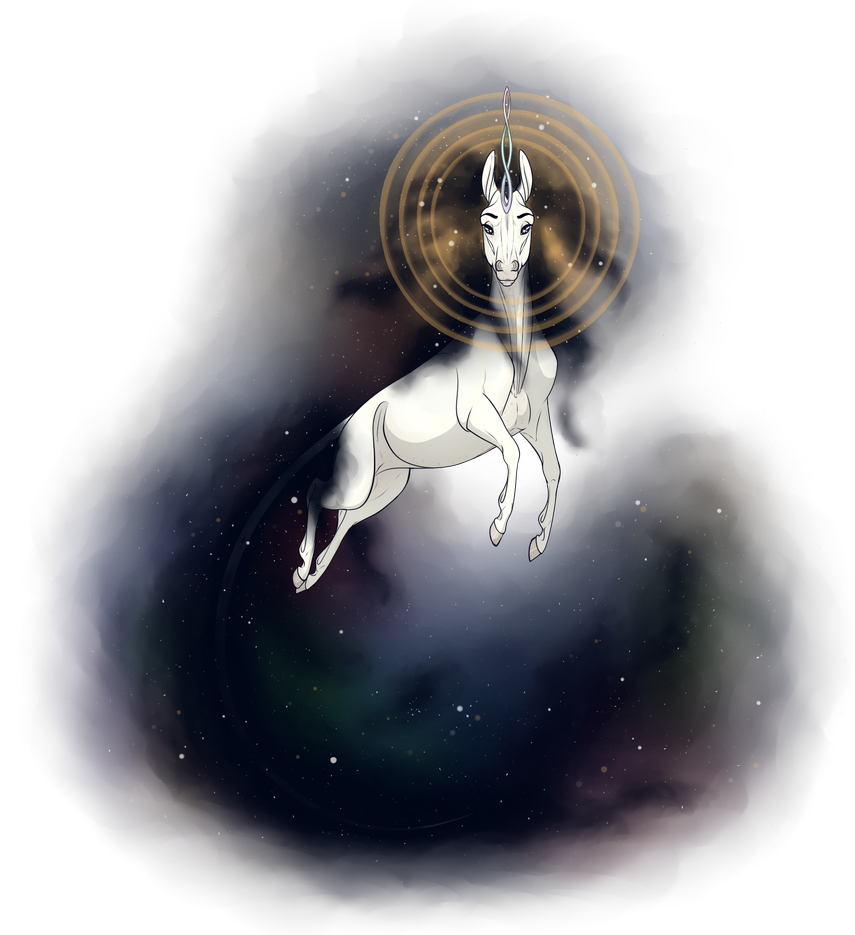 Blessings of the Astral Region

As a Demi-God, Quirlicorns will be known far and wide for their powerful abilities to wield magic.

Apprenticeship Under a Higher Being

The Quirlicorn will be able to work directly under the guidance of one of the Deities of their choosing in order to learn the new Astral Magics bestowed upon them.

The land between worlds is unlocked for claiming to those who have achieved such status.

Gifted the most powerful of magics, the Quirlicorn will be able to now wield the magics of the Gods.

Letting The Cat Out Of The Bag

Letting The Cat Out Of The Bag… Welcome to this special event, which is intended to drive our breeds lore further.  This means that actions

The Day Magic Died Welcome to this special event, which is intended to drive our breeds lore further.  This means that actions in this event